The European Union ensures political unity across the continent. It enjoins the 28 member states to positively integrate with one another. Generation after generation of turmoil, hitting a climax during the first half of the twentieth century, eventually led the European nations to come together over trade relations and diplomacy, rather than focusing on their own interests. Never has there been a more harmonious period within Europe than in the last half century or so; economically and diplomatically.

Yet this stability is now under jeopardy. The cohesion formed between EU member states could be torn apart. For it has met perhaps one of its greatest obstacles yet: the refugee crisis. The UK’s Prime Minister David Cameron recently labelled it the “greatest challenge facing Europe today”.

Within the last few years, there has been an upsurge to those flocking towards Europe; fleeing various African and Middle-Eastern nations. Much of the spotlight is of course on Syria; being engulfed in a five-year long civil war, which has claimed over 250,000 lives, and displaced millions. Approximately half of those seeking asylum in Europe come from Syria (as shown in the chart below), despite them being the center of much coverage on the refugee crisis. 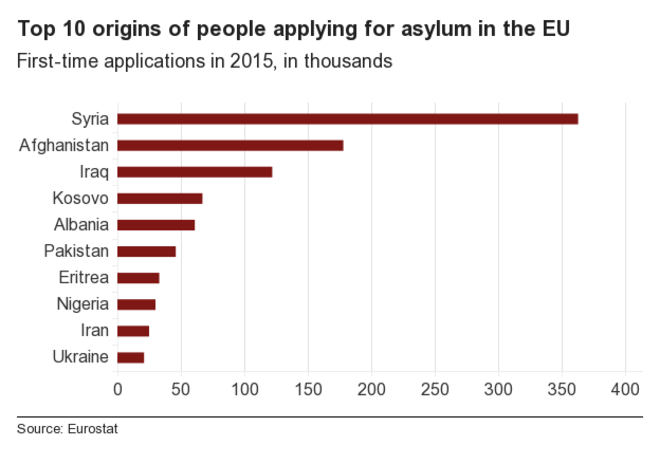 As any of us would in their situation, these displaced civilians are evacuating their homes to escape the unending prospect of death; or simply because their homes have already been destroyed. This is understandable. I’ll say this, even if many would insist on shooting me down for daring to sympathize with the circumstances of refugees.

Like with any grand scheme, there are potential repercussions.The influx of refugees has caused a proliferation in resentment and fear across Europe. This explains the rise in support for many anti-immigration, Eurosceptic groups, such as Britain’s UKIP and France’s Front National, whose political campaigns have benefited from the refugee crisis. Propaganda and scare-mongering has heightened this too. Thanks to efforts from the Sun, the Mail, and the Express (to name a few UK newspapers), the term ‘refugee’ has become synonymous with ‘economic migrant’ or ‘ISIS’. One prevalent term floating around is ‘rapefugees’, used as a collective label after several sexual assaults in Germany, despite the fact that less than 1% of the crimes committed by refugees have been sex crimes.

Angela Merkel has been hailed as a type of messiah due to her charitably. The plan itself has seemingly not been thought through adequately. Not only has the unrest across caused by a great influx of refugees not been taken into consideration; there appears to be little collaboration, and even an air of discord, on how to handle those who have not been settled, such as those in Calais. This further highlights how it is posing a threat to the unity of Europe.

If the EU project is to remain standing, and retain a union with all 28 member states, it needs to regain credibility in the eyes of the public. It needs to show it can effectively handle issues like this. It needs to meet the needs of the public, and banish the stigma of it being undemocratic.

In fact, one concern I have is how Greece has been treated during the refugee crisis. Being on the Mediterranean border, Greece is the first stop for many crossing the sea. Out of a total of 1,005,504 arrivals by 21 December last, 816,752 arrived by sea in Greece, according to the International Organisation of Migration. However, Greece have been warned if they cannot stem the flow into Europe, they will be expelled from the Schengen zone, meaning that it would be harder for refugees to actually leave Greece. Given their final woes in recent years, this would surely be a final nail in the coffin for Greece.

Therefore, there needs to be a balanced and fair approach to the crisis. Humanitarian desires and practical limitations need equal consideration.  Instead of pushing them out, or letting uncontrolled figures enter European countries, an appropriate distribution needs to be made of those already in Europe- to different countries, based on each nation’s own economic and geographical circumstances.

The EU should still make an effort to deal with the crisis overall. A way to achieve this would be for EU states to come together and establish safe zones in war-torn countries like Syria and Afghanistan – for neighborhoods. Humanitarian aid could be delivered to nations like Somalia and Eritrea; along with support to nations like Lebanon and Jordan, who are housing vast amounts of refugees.

In the case of Syria in particular, this would require co-operation between the broader international community, including Russia and the US. Firmer consolidations on the recent ceasefire, during which over a hundred people have been killed, would need to be made.

Pan-European co-operation is vital in dealing with this issue, and to prevent the EU from collapse. Increased frustration towards the crisis is evidently a driving force behind the anti-EU movements. This needs to be stemmed, to maintain the unity provided by the bloc. The EU countries can deal with this crisis altruistically,  whilst doing so in a practical and diplomatic way. Failing to take the public’s discontent seriously could very well have repercussions.

One thought on “If the Refugee Crisis isn’t managed appropriately, it could be the downfall of the EU”